MediShield Life - How does it affect you?

You may have already heard  about the upcoming launch of MediShield Life. I have received many enquiries about how it would affect policyowners of private Shield plans. In this article, I’ll share with you what industry practitioners know about MediShield Life so far, and its impact on you. To understand the situation better, we have to first understand how MediShield Life, and its predecessor MediShield works.

MediShield Life is an upgrade to the existing MediShield scheme. For those who are unfamiliar with this, MediShield is a nationwide Hospitalisation and Surgical (H&S) insurance scheme administered by the CPF Board. Premiums are paid annually from one’s CPF Medisave account and it reimburses your hospital bill.

There is, however, a cap to the coverage. For example, room and board charges are capped at a claim limit of $450 a day. Likewise, surgical fees are capped at $150 to $1,100, depending on the severity of the condition.

Before all these can be claimed, MediShield has a ‘Deductible’ of $1,500 to $3,000. Think of this as your motor insurance ‘excess’, whereby only the bill amount in excess of the Deductible can be considered for claim. In insurance, deductibles have the function of reducing premium rates by removing a degree of risk from the insurer, and passing that risk to the policyowner.

After applying the Deductible, a ‘Co-Insurance’ of between 10% to 20% applies to the remaining bill. This means that the policyowner is essentially co-insuring him/herself 10-20%, with the insurer insuring the remaining 80-90%. The rationale of this is so that policyowners will not make unnecessary claims, as well as keeping premiums low.

There is a maximum lifetime claim limit of $300,000, and annual claim limit of $70.000.
MediShield also has a maximum cover age of up to 92 years old. This would be a worrying concern, with Singapore facing an ageing population problem. 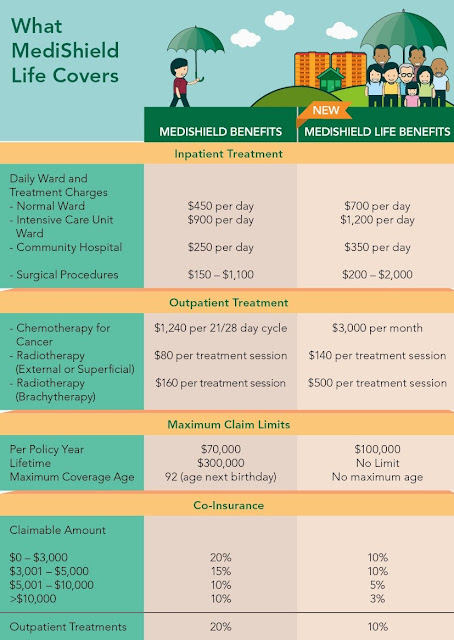 MediShield Life is due to take effect in late 2015, and here are the proposed changes.
Enhanced Benefits
Universal Coverage
Increased Premiums

Despite the much welcome enhancements, MediShield Life is not perfect. Let’s analyse how the plan can help different groups of people.

For those who are declined private insurance coverage due to pre-existing medical conditions, MediShield Life is very important as it may be the only form of H&S coverage that they can buy.
Such cases include people with history of, or currently suffering from cancer, heart disease, diabetes, obesity, kidney disease or any other medical conditions that can lead to multiple complications.

MediShield Life is also good for people with pre-existing conditions and have bought private H&S insurance, but with exclusion of their condition from the coverage.

Examples include people with hypertension (high blood pressure), raised cholesterol, slipped disc, asthma and any other not-so-critical conditions which are excluded by the insurers.

In this case, the private H&S plan may not cover the pre-existing condition. However, they will still be able to fall back on MediShield Life as a safety net. Yes, even if you have purchased a private H&S plan, your MediShield is still active. The private H&S plan sits on top of the MediShield coverage, provides 5-6 times higher annual limit, and covers on an ‘As Charged’ basis. This means that there is no room & board or surgical fee limits. One with a private plan can incur a $50,000 surgical fee, and yet the whole amount can be considered for claim, whereas with MediShield Life, we are looking at only about $2,000 out of that $50,000 is claimable. (See figure 1.)

For the rest who have bought your private H&S plans with no exclusions, MediShield Life would have practically minimal impact on you (besides the premium increase), as you already own a plan which provides higher cover than what the enhanced MediShield Life is going to provide.

Despite the fact that MediShield Life addresses some key inadequacies of its predecessor, it is still designed for the purpose of providing a bare-bones essential coverage for the whole population. It has to strike a balance between decent coverage and low premiums, so that it is suitable for the majority.

The reason why CPF allows individuals to buy private H&S plans is because they understand there are those who want better medical care, such as ‘A’ ward or private hospitals. MediShield is not designed for such higher level of medical care. Keep in mind that most private insurers also sell a ‘rider’ that can cover the Deductible and Co-Insurance amounts. Hence if you are fortunate enough to be able to afford the rider, you can enjoy full coverage of your medical expenses. (See figure 2 for an example of how a $20,000 B2 bill can be fully covered.) 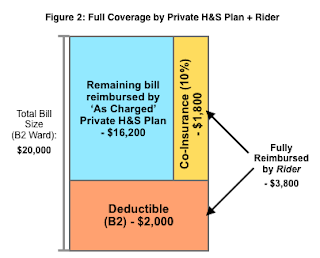 Private H&S plans and their corresponding riders also provide some additional benefits not covered under Medishield Life, which can be as important as the main hospitalisation plan itself.

With private H&S plans, you can opt to have coverage up to private hospitals. With that, you have the option to go either public or private. This option is particularly useful when you are suffering from a condition that is causing you pain and discomfort, but not a medical emergency. For such cases, one might have to schedule an appointment ad wait for months in order to get treated. With private hospitals, the same condition can be treated in less than half a day.
Pre and post hospitalisation expenses


Many cases that I have dealt with involve consultations with a specialist, treatments, medication and follow-up. If you are visiting a private specialist, each consultation alone would set you back at least $150 to over $300. Post-hospitalisation procedures such as removal of metal fittings from a fractured hand can cost more than $7,000. These expenses are not claimable under MediShield Life. All private H&S plans provide this cover. As of writing, Prudential offers the longest duration of such cover, protecting up to 180 days before and after hospitalisation.
Overseas Medical Treatment
Medishield Life is designed for local hospitals. Period. Most private H&S plans will also reimburse hospital expenses incurred while overseas if it is deemed to be an emergency medical treatment.
Accidental Outpatient Treatment
Medishield Life only covers for inpatient hospitalisation, with the exception of day surgery and cancer / kidney failure treatment. Many private H&S plans also provide outpatient accidental treatment coverage for cases such as falls, fractures, cuts that require stitching, and other relatively minor injuries that do not warrant a hospital stay.

MediShield Life is a welcome change. However, one should still consider a private H&S plan to safeguard against high medical costs, and to have a peace of mind that the full amount can be covered.