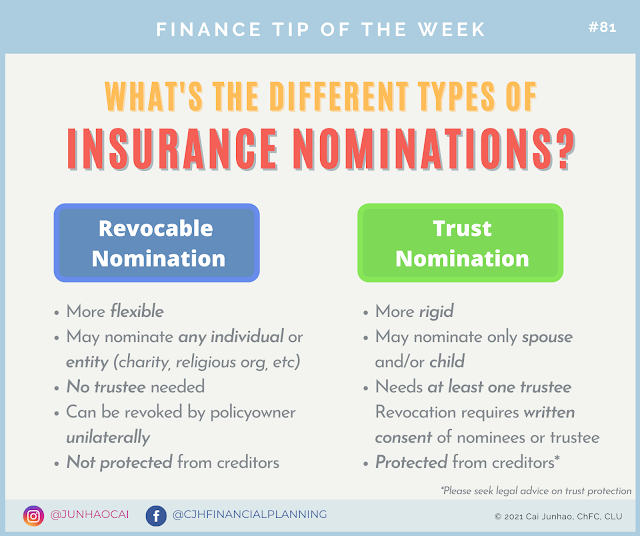 If you own a life insurance policy with death benefit, you may choose your nominees (or beneficiaries) to inherit the insurance proceeds using one of the two types of nominations.
✏️ 𝐑𝐄𝐕𝐎𝐂𝐀𝐁𝐋𝐄 𝐍𝐎𝐌𝐈𝐍𝐀𝐓𝐈𝐎𝐍 (𝐒𝐄𝐂. 𝟒𝟗𝐌)
A revocable nomination informs the insurer who to pay the insurance proceeds to, and in what proportion. You may appoint anyone as a nominee, including foreigners or legal entities such as charities, or religious organisations.
As the name suggests, it can be "revoked" or terminated anytime that you wish, without permission from nominees.
Nominees will only receive the death benefit, while the living benefits belong to the policyowner.
Take note that if you make a Will after doing a revocable nomination, it will supersede the instructions in the nomination.
✒️ 𝐓𝐑𝐔𝐒𝐓 𝐍𝐎𝐌𝐈𝐍𝐀𝐓𝐈𝐎𝐍 (𝐒𝐄𝐂. 𝟒𝟗𝐋)
A trust nomination serves the same purposes in informing the insurer who to pay to. However, you can only nominate your spouse and/or children under this instrument.
Once a trust nomination is effected, ALL policy benefits (living and death) belong to the nominees, not the policyowner.
A unique feature of trust nomination is that you'll also need to appoint a "Trustee" who acts as the custodian of the money for the nominees.
A trust nomination is more rigid and harder to revoke, in order to protect the interests of spouse/children (even from creditors). Revocation requires the written consent of all nominees (or their parent if a nominee is below 18), or the Trustee.
Given its inflexibility, you should only do this if you are willing to give away the benefits of the policy absolutely, as it might be difficult to amend or terminate even if your family circumstances have changed (e.g. divorce).
💡 If you have a policy started in 2009 or earlier, do check with your adviser if your nomination is according to the current insurance nomination law.
💡 Muslim policyowners are allowed to make both types of nominations, as decreed by MUIS. You may refer to the Fatwa here.
financial planning Insurance life insurance nomination